Report: Most U.S. Credit Cards Will be EMV Enabled by End of 2015

According to a recently released report from the Aite Group, 70% of U.S. credit cards and 41% of U.S. debit cards will be EMV enabled by the end of 2015. EMV chip technology, named after its original developers (Europay, MasterCard and Visa), is becoming the global standard for credit card and debit card payments because it promises to bring a reduction in card fraud resulting from counterfeit, lost and stolen cards.

Merchants and issuers alike have been slow to adopt the technology in the U.S. because of the costs of adoption, but have been spurred to make the move due to the spate of recent data breaches, from major retailers such as Target and Neiman Marcus.

The new report from the Aite Group predicts that most card issuers will have sent out new EMV credit cards by the first quarter of 2015. 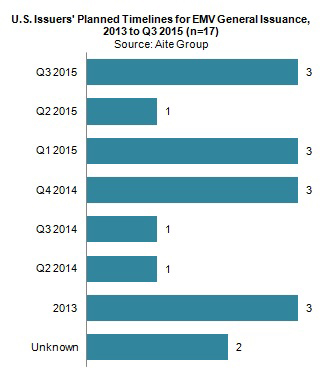 If all goes as planned, most banks will have issued EMV enabled cards before the coming “liability shift” in October 2015. The liability shift marks the deadline when merchants will assume liability for any fraudulent transactions that occur because they are using a less secure technology. For instance, if a customer uses a chip card, but the merchant runs a transaction under the old system with a swipe and signature, the merchant will be responsible for any costs arising from fraud. Previously, the issuing bank was always responsible for absorbing those losses.

According to banks, the reason why they will mostly be issuing “Chip and Signature” cards is because they don’t want to have to teach Americans too many new things at once. While people are used to entering a PIN for their debit card transactions, they are accustomed to signing for their credit cards, so they want to keep that consistency.

But whether it’s “Chip and Signature” or “Chip and PIN,” either one will be a significant improvement over the traditional magnetic stripe technology that currently dominates the U.S. payment industry.