Through November 25, 2017 or while supplies last, you can use your Navy Federal Visa debit or credit card to get a free Costco Gold Star membership. Simply purchase a Costco Membership Activation Certificate through the link below to join Costco as a new member and you’ll receive a $60 statement credit to reimburse you for your first year’s Gold Star membership fee. Note: This offer is only valid for new Costco members and is not valid for renewal of an existing or expired Costco membership..
END_OF_DOCUMENT_TOKEN_TO_BE_REPLACED

If you live in California, Southwest and Chase have a great deal for you. Through November 30, 2017, when you open a new Rapid Rewards credit card and make a purchase, you’ll get a free Companion Pass. When you have Companion Pass status, you can name one designated companion who can fly free with you every time you fly on Southwest, provided they share the exact itinerary as you, as long as a purchaseable fare for your itinerary is still available.

In addition, you’ll earn 40,000 points after you spend $1,000 in the first three months of opening your account.
END_OF_DOCUMENT_TOKEN_TO_BE_REPLACED

Visa Checkout: Buy 1 Movie Ticket, Get One Free Through Fandango

The popular Visa Checkout / Fandango deal is back. Through August 27, 2017, when you buy 2 or more movie tickets on Fandango using Visa Checkout, you’ll get one movie ticket in your order for free. Use promo code DEALSTHATCLICK7 at checkout before completing your purchase with Visa Checkout and the second-highest priced movie ticket purchased and one convenience fee will be deducted (up to $25 total value) from the purchase price. Limit one promo code redemption per person, while supplies last.

For complete details or to take advantage of this promo, visit this link. 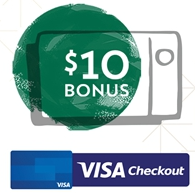 Through September 30, 2017 or while supplies last, you can get a $20 Starbucks eGift card for $10 when you pay using Visa Checkout. To take advantage of this offer:

The eGift card will be delivered via email and the sender will receive an email confirmation once it has been delivered. Limit 1 bonus load per person. The promotion will end either on September 30, 2017 or when 225,000 bonus loads have been distributed.

Best Buy and Amex have teamed up for yet another offer. Through September 10, or while supplies last, you can get $30 back off your purchase of $300 or more at Best Buy when you register your eligible American Express card and make a qualifying purchase. As usual, enrollment is limited and it’s a popular offer, so you’ll want to add the offer as soon as possible to take advantage.

In addition, Amex has added a number of other new promos:

END_OF_DOCUMENT_TOKEN_TO_BE_REPLACED

Through June 30, 2017 or while supplies last, you can get $25 back after spending $65 or more at Boxed.com when you first register your American Express card for this promo. Boxed.com is an online warehouse store which sells many of the same items you’d find at places such as Costco.
END_OF_DOCUMENT_TOKEN_TO_BE_REPLACED

Visa Checkout: Get a Free Movie Ticket When You Order 2 or More on Fandango

Want to save a few bucks on your next trip to the movie theater? Through April 1, 2017, when you buy 2 or more movie tickets on Fandango using Visa Checkout, you can get one movie ticket in your order for free. To take advantage of this promotion, enter promo code DEALSTHATCLICK4 at checkout before completing your purchase with Visa Checkout and the second-highest priced movie ticket purchased and one convenience fee will be deducted (up to $25 total value). Limit one promo code redemption per person.

For complete details or to take advantage of this promo, visit this link.

Through May 31, 2017, new cardmembers who sign up for either a Hilton Honors or Hilton Surpass credit card from American Express are eligible for sweetened sign-up bonuses.

END_OF_DOCUMENT_TOKEN_TO_BE_REPLACED

SPG Amex Matches Its Highest Ever Signup Bonus of 35,000 Starpoints

Starting today, through April 5, 2017, the Starwood Preferred Guest Credit Card from American Express is bringing back its highest ever sign up bonus of up to 35,000 Starpoints. That’s up from the 25,000 Starpoints usually offered for signing up. 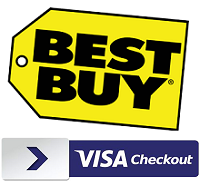 Through February 22 or while supplies last, you can get $25 off your purchase of $100 or more at BestBuy.com when you pay with Visa Checkout. Exclusions do apply, and this offer is limited to one per customer. Notably, gift cards and prepaid cards and services purchases do not qualify for this promotion. The $25 discount will be automatically applied to your qualifying BestBuy.com purchase of $100 or more when you select Visa Checkout as your only payment method.

Credit Card Watcher has been tracking and reviewing the best credit card offers since 2006. Follow to make sure you don't miss a deal!