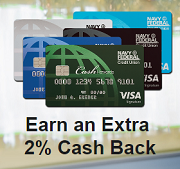 To no surprise, everyone wants a piece of the Costco pie. Much as Chase announced it would extend its bonus 5% cash back at warehouse clubs through the remainder of 2016, Navy Federal Credit Union announced that its cardholders would also earn an extra 2% cash back at warehouse clubs such as Costco, BJ’s, and Sam’s Club through December 31, 2016. This extra 2% cash back will be awarded in the form of a statement credit on top of the rewards that the card normally awards.

This offer is valid for both new and existing Navy Federal Visa cardholders. As with the Freedom offer, warehouse club special services, such as travel, insurance, cell phone, and home improvement, are excluded from this promotion. In addition, online purchases are not eligible, either. Gasoline purchased at Costco will be eligible for the extra 2% cash back, but other purchases of gas at warehouse clubs will not.

Cash back will be posted as a statement credit within 30 days after the calendar month in which the transaction posts to the account.

For more information on this promotion, see this link.