Today, Twitter announced the launch of Twitter Offers, a new program aimed to drive sales directly through Twitter advertisements. For those familiar with Amex Offers, the system is very similar — when users see a Twitter Offer on their timeline, they can add the offer to their credit or debit card, then redeem the deal in real time by using that card at the merchant. As with Amex Offers, the promotion is tied to their card, so there are no coupons to redeem at the point of purchase. The cash back savings then appear on their card statement within a few days.

To see the above image enlarged, click on it.

Once users add a Twitter Offer to their credit or debit card, that card information will be encrypted and stored to make subsequent Twitter Offers or purchases easier in the future. 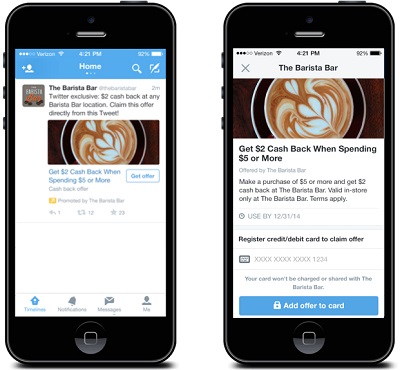 The new service is powered by CardSpring, which Twitter acquired in July. That technology allows consumers to link coupons with their credit or debit card and to automatically redeem the offer when the customer uses the card to make a qualifying purchase.

During the initial launch phase, Twitter said it intends to work with a handful of brands to begin testing this new feature, with details to be released in the near future.

Will Twitter Offers work in tandem with Amex Offers?
While there’s no official word on this yet, on the surface it seems like you should be able to stack both Amex Offers and Twitter Offers for merchants that offer both simultaneously, since the promos are coupon-less. That would result in some potentially great deals, but it’s something we’ll have to wait on to see.